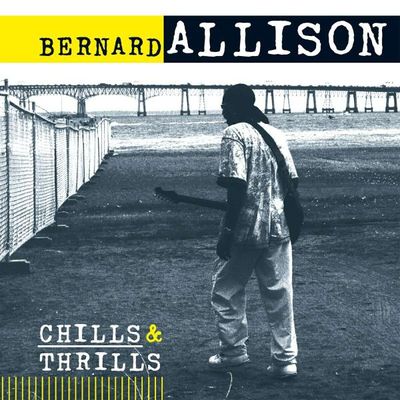 Jazzhaus Records is very pleased to announce the signing

of the well-known singer/guitarist Bernard Allison. His upcoming album

“Chills and Thrills” will be released on the 23rd of November 2007.

Being the son of the late legendary Chicago blues artist

musical footsteps. Growing up Bernard learned to play the guitar at a very young

age by slowing down his dad’s LP´s and listening to every single note. Bernard

made his first appearance on record at the age of 13, when he played on a live

LP his father recorded in Peoria,IL.

Bernard Allison continued to develop his own creative

brand of blues music that remains blessed by the purists. Now he offers

generation of the blues”.

Bernard recalled „ I picked up the guitar, listened to records. I was in

grade school and I played with the high school jazz band. They thought I was

reading the sheet music, but actually I was making up everything I could play“.

Soon after graduating from High School, he began a three-year

1983 Blues Festival - one of the event´s highlights. Along the way, Bernard

from the late Stevie Ray Vaughan.

With those experiences under his belt, Bernard moved to Paris

in 1989 to live and play the blues with his father. He joined the tourband of

Chicago Blues Festival. A recording of this formation is to be heard on the

in 1990 with the significant title „The Next Generation“.

He started touring with his band all over Europe and released

Guitar Watson. Produced and recorded in Switzerland by Dom Torsch at Relief

Studios, this CD contains 12 songs (10 by his own) in a very high recording

of black music. He is playing the blues - but he always plays it funky....

Bernard´s 5th album „Born With The Blues“ was a solid,

Ron Levy and the killer band of Buddy Guy. That album and subsequent European

continued growth as a songwriter, as well as an increased depth and diversity in

his repertoire. „Times are changing“ is extremely dynamic compared to the

bluesy, foot stompin´ opener, „ I Can´t Get You Out Of My Mind“, to the funked

up and jazzy cover of Sly Stone´s classic „If you want me to stay“, to the

poignant acoustic memorial to the passing of his father, „Don´t Be Confused“.

Appearing twice on the album, „Don´t Be Confused“, lends the

yet, despite the varied musical terrain, this is undeniably the blues. He covers

each style in easy, powerful strides. Backed by a drivin´ rhythm section, a rich

Hammond B3 and equally powerful horns, his guitar soars and growls while his

vocals are sharp and evocative. Throughout, Bernard´s nimble picking, memorable

influence of a life spent around his legendary father, Luther, and the blues.

Bernard seems to have inherited Luther´s knack for igniting

audiences, but he´s no clone of his famous father. He is definitely blazing his

influences. The Allison torch has been passed, and it´s clear that Bernard takes

his role as its bearer very seriously. He´s assumed the challenge of keeping the

blues alive and growing - a commitment he renews every time he takes the stage.

In 1999, two years after Luther passed away, Bernard decided

to move back to the States, return to his roots and to push his career in his

native country. He changed his record company from Ruf to Tone-Cool and is back

with „Across The Water“, a powerhouse blues rock records, with a strong,

Collins). Aggressive touring and world-class management have Bernard poised for