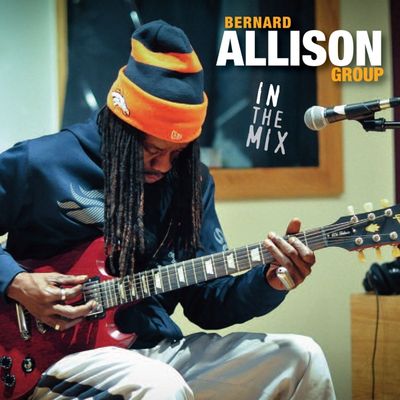 Bernard Allison is back with a new studio album called In The Mix after six years. The guitarist / singer started to release albums in 1990 and is now presenting his 13th Opus since then. This recent recording of the son of the legendary blues musician Luther Allison (1939-1997), who once learned his instrumental skills with Johnny Winter and Stevie Ray Vaughan, includes ten tracks. Two of them are compositions of his father, one is written by Freddie King, who has occupied his band as one of the first with whites and blacks. The kick-off song of the album is written by the famous Colin James well known for his fusion of blues, rock and neo-swing. The others are original compositions by Bernard Allison himself. The man from Chicago is very satisfied with the result: I wanted to record an album with songs full of guitar. With success, because the result reminds me of the old Memphis Soul including a touch of Jimi Hendrix's Band Of Gypsy!

Mark "Muggie" Leach : Hammond B-3 on all tracks, Piano on track 4