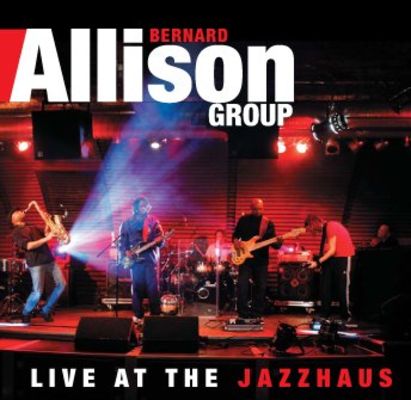 Live at the Jazzhaus

The Bernard Allison Group is on tour in early 2011 with their latest album "Live at the Jazzhaus" which was recorded and filmed at the Jazzhaus in Freiburg in November 2010 and will be released on the 28th January 2011 on Jazzhaus Records. The record contains primarily original compositions of his last two studio album "The Otherside" and "Chills & Thrills" but also songs written by his father Luther Allison. “Live at the Jazzhaus” the best product to get an impression of the excellent qualities of the Bernard Allison Group, which is playing around 150 shows every year worldwide with their mix of blues, soul, funk and rock.

Like father like son. The veracity of this adage applies to Bernard Allison. Bernard, born on 26th November 1965 in Chicago, continues the legacy of the blues legend who died in 1997. At the age of ten years, the youngest of nine children, began playing guitar. The first instrument gave him the head of the family under the condition that he takes guitar lessons. His teachers were Johnny Winter and Stevie Ray Vaughan. After finishing school, Bernard Allison was a member of Koko Taylor's Blues Machine. In 1989 the talented son finally got musical director of his father’s band. In 1990 Bernard Allison released his solo debut "The Next Generation". "I try to pick at the spot where my father had to stop. But I can not be him, just me, "Bernard Allison disclosed on his eponymous website. The required practical skills he has, who mentions the guitarist and vocalist Albert King and the Isley Brothers Soul-/Funk-Band as the most important influences, as well as the interpretive feeling. "In order to develop something further, you have to risk something," says Bernard Allison. "Blues is to convey emotions but also to try some experiments. In relation to me this means: Instead of to reproduce the familiar patterns over and over again, there are bluesy, even soulful, funky or rock songs "The fascination of this sound develops mainly on stage. It will be offered even more when bridges between tradition and modernity by experts such as Bernard Allison Group are showing on stage. The band is also besides Bernard Allison George Moye (bass), Erick Ballard (Drums), saxophonist and percussionist Jose Ned James (Prince, Tracy Chapman, Ruben Blades), Toby Lee Marshall (keyboards) and as a second guitarist, Mike Goldsmith from Freiburg.