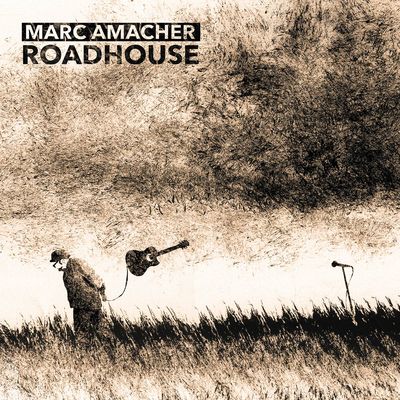 „Roadhouse“, the new album by blues-rocker Marc Amacher, pulls the listener into that kind of cathartic environment, where all bets are off and rules are made to be broken. It's an explosive collection of 13 songs by a musician whose deep connection to blues tradition doesn't prevent him from pushing the boundaries of the genre. The album is a reflection of those very high standards, which he applies to himself as well as others. A blues-rock artist on the rise, Amacher has put every bit of himself into making this album – one that positively sizzles with the pure power of the blues.

Roadhouse. Open the dictionary and you’ll see it defined rather blandly as a “tavern, inn or nightclub located outside a town or city.” But blues fans know it means a lot more than that. The roadhouse is a rough, rowdy club where drinks are flowing, butts are shaking and the music is loud and raw and ecstatic. Roadhouse, the new album by blues-rocker Marc Amacher, pulls the listener into that kind of cathartic environment, where all bets are off and rules are made to be broken. It's an explosive collec-tion of 13 songs by a musician whose deep connection to blues tradition doesn't prevent him from pushing the boundaries of the genre.

Amacher was born in the scenic village of Brienz, surrounded by the mountains and lakes of the Swiss Alps – not exactly the cradle of the blues. Like thousands of guitar players the world over, he discovered the blues through guitar heroes like Clapton and Stevie Ray Vaughan, then began digging further and further into the music's rich past. Early on, he realized playing and singing the blues was a good way of dealing with life's difficulties. The music resonated deep within him.

"I don't know if you come to the blues or if the blues comes to you," he reflects in typically down-to-earth fashion. As a teenager, he was already convinced the blues would play an important role in his life. "The music was my anchor. It gave me strength and helped me get through life."

Amacher remained widely unknown outside his native region until 2016, when he decided to audition for the popular TV talent show The Voice of Germany. "I didn't even want to go at first," he admits, though he was curious to see how he would stack up against the other contestants. As it turns out, he made it all the way through to the finals. His successful run included duets with showbiz biggies in-cluding Robbie Williams and Alicia Keys, who praised him for his strong stage presence and soul-infused voice. "I never expected to be appreciated in that way. For the first time in my life, people took me seriously as a musician."

After riding the wave of interest that followed those TV appearances and releasing a lavishly produced studio album entitled 8 Days in early 2018, Amacher is now back where he belongs: with an electric guitar in his hand and a kick-ass band behind him. When it came time to record a new album, Amacher knew he wanted to get away from the pop music glitz and do something raw and authentic, something that reflected his musical roots and down-to-earth attitude. That album is Roadhouse. The album title provides a clue as to where it was made: Amacher contacted several musicians who had shown a feel for the blues during the 8 Days sessions and arranged to record with them inside an abandoned restaurant close to where he grew up. After converting it into an ad hoc recording studio, the guitarist and his new bandmates banged out 17 songs in two days, 13 of which were chosen for the record. What resulted is in many regards a live album. Roadhouse is the sound of four musicians playing together and feeding off each other's energy. There are no tricks, no overdubs. Just four people pushing each other and creating powerful sounds at the crossroads of blues and rock.

Though Roadhouse revisits several titles he already recorded for 8 Days, the difference between the two albums is like day and night. "The production on 8 Days may have been a bit too poppy. Importance was placed on if the music was suitable for the radio, which I found somewhat strange," Amacher recalls. This time he was free to execute his own musical vision. Roadhouse starts with a straight and powerful rhythmic foundation and puts the full-bodied sound of Amacher's guitar front and center. "I have never aspired to be the world's fastest guitar player or the best at copying old songs note for note," he says. "I've always been looking to do my own thing." He achieves this goal by assimilating all manner of musical influences in his songs – from John Lee Hooker and R.L. Burnside to Jack White through to Motörhead and AC/DC. His unique approach to the blues can be heard in the Bo Diddley-meets-hard rock power of "Open Window" and in his adventurous re-inventions of the classic "Smokestack Lightning" and "Death Letter." He also leaves his mark with an unmistakable singing voice whose raspy quality has earned him frequent comparisons to Joe Cocker. "My way of singing just sort of happened. I'm not really concerned about whether I sound husky or not," he laughs.

The only factor that truly matters in Marc Amacher's musical universe is total commitment. He expects his bandmates to be on their toes and to always give 100%. "They should be totally absorbed in the music, watch what happens, listen and react to the moment." In a perfect world, the people who attend his concerts would put away all their electronic devices. "It's a shame everyone is so busy taking selfies and making videos instead of being fully locked in on the music." Roadhouse is a reflection of those very high standards, which he applies to himself as well as others. A blues-rock artist on the rise, Amacher has put every bit of himself into making this album – one that positively sizzles with the pure power of the blues.