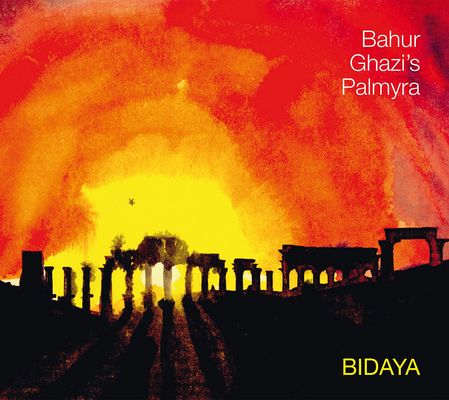 Musical journeys between the Orient and the Alps are now part of the basic vocabulary of the globalized world. However, the Syrian composer and oud player Bahur Ghazi spans a two-way bridge: from his new home, he combines the cosmopolitan creativity of the Swiss jazz scene with the magic of an oasis city, and he spans a fascinating arc from ancient pictures to the bitter present of Syria.

Palmyra - the very sound of this word conjures up fabulous images: the dazzling oasis and caravan city between Damascus and the Euphrates River has been on the world stage of history throughout ancient times. It developed a unique culture as the hub of the Greco-Roman and Persian sphere of influence, had its own language and local deities, experienced early Christianity and Islamic conquest, was destroyed several times and rose again and again like Phoenix from the ashes. After the desert winds swept over the ruins of the temple for 1,000 years, Palmyra's cycle of ascension and descent was repeated in modern times: the site was declared a UNESCO World Heritage Site in 1980 and since 2015 the Islamic city has had it twice removed, as it has caused deep wounds with explosions.

For the musician Bahur Ghazi, Palmyra is such an immense source of inspiration that he has chosen the city as the namesake for his quintet. He sees the legendary place as the refuge of a thousand-year heritage, as a symbol for an exciting network of cultures and as a symbol of dignity and hope for Syria, that has been destroyed by civil war and the IS. Before the war, Ghazi was one of the leading musical creative minds of his homeland: he discovered his skills on the Arabian lute through the Iraqi oud luminary Naseer Shamma and worked as a teacher at the renowned Cairo institution Bait al Oud Arabi (Arabic according house) headed by Shamma.

His Swiss exile has given Bahur Ghazi the opportunity to continue to practice his art without the daily threat of the brutality of the war breathing down his neck. He now works in a broad range as a jazz musician, but also as a writer for classical orchestras and for theater. The current location gives him a very special, new look at Syria: surrounded by leading Swiss jazz musicians on accordion (Patricia Draeger), piano (Christoph Baumann), upright bass (Luca Sisera) and drums (Dario Sisera), he draws from a distance to his homeland sprawling, colorful tableaus. In them, the Arabian heritage unfolds as a kaleidoscope from Andalusia across the Mediterranean to the desert, and at the same time the musicians combine this legacy of the Arabic maqam scales with the improvisational musical language of Europe.

The introductory piece "Bidaya" balances between the oriental oud intro, the swaying accordion of Draeger and a Cuban-inspired piano interlude by Baumann. Abruptly, the listeners find themselves in the floating, mysterious atmosphere of the "Septimia Dream", which seems to escort one into the ancient past of Palmyra. This then appears magnificently and dramatically in the long title track, as if in a vision the old columns rise from the shimmering desert air. But this is just the beginning of the journey of Bahur Ghazi and his four colleagues, it holds many other stations ready: "The Getaway" is a rhythmically complex hunt over a stumbling, urgent ostinato, that reminds one of a Rabih Abou-Khalil, but also increasingly takes on a rock drive.

Ghazi's dedication to the Qasioun, the local mountain of Damascus, is dressed as a melancholy and equally virtuoso oud song, as a lament to the lost grandeur of a now ruined city. In the presumptuous “Grünfink”, a trumpet with arabesque quarter-tones suddenly takes the command. And in the epic "Salvation Voyage", the combination of the Orient and the Occident succeeds in the most organic form: Bahur Ghazi leaves long stretches of the design to a bass with a singing intro and the accordion, with an almost Balkan melancholy.

With "Bidaya", Bahur Ghazi and his Swiss quartet, combine fabulous antiquity and painful modern times to form impressive soundscapes - always with a highly up-to-date reference that goes far beyond the traditional clichés of 1001 Arabian Nights.