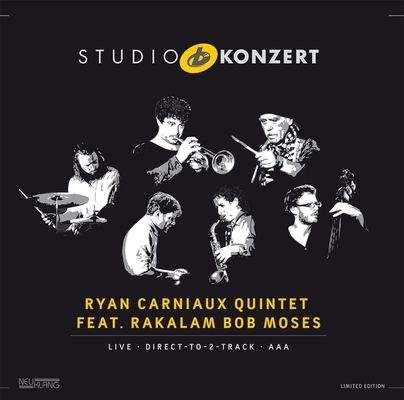 STUDIO KONZERT is the audiophile Direct-To-2-Track fully analogue recorded concert series, produced by the Bauer Studios since early 2013 and available in shops as numbered and limited 180g vinyl records with a premium-quality packaging.

STUDIO KONZERT: That is our large atmospheric recording room, which inspired numerous first-class artists. That is also extreme concentration and highly motivated artists for this very special moment. It is an attentive audience captivated by the fascination of this moment. This is the only way to create such fascinating moments in a very special concert situation.

STUDIO KONZERT: That are experienced sound engineers who conduct the acoustic brilliance with our first-class studio equipment: precious microphones, analogue effect devices and our clear, analogue Neve mixing console. Our Studer A 820 tape-records in a unique “direct-to-2-track” way.

In 2015 the trumpeter Ryan Carniaux already had contact with the unique atmosphere and sound quality of the live-recordings at the „Bauer Studios“ Ludwigsburg/Germany as he played as a sideman with Johannes Mössinger. That led him to play his own „Studio Konzert“ during his release tour in summer 2017 with the internationally known drum legend Rakalam Bob Moses.

2017 the trumpet Ryan Carniaux and the percussionist Rakalam Bob Moses published their duo CD „Opportunity for Unity“. During the tour of the duo they came up with the idea of recording new music with a bigger ensemble at the „Bauer Studios Ludwigsburg“.

With Plume playing the saxophone, Mike Roelofs on the piano, Demian Caboud on the bass and Samuel Dühsler on the drums, the recording engineer Adrian von Ripka had to expect an excellent ensemble and the challenge to record two drums direct-to-2-track at the same time.

The result is an album in which master of improvisation with different cultural backgrounds present modern, melodic jazz.