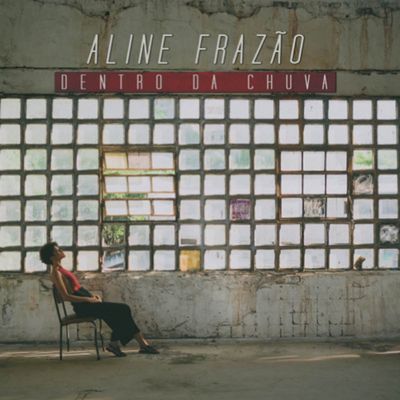 If you take a closer look at the Portuguese music scene of 2018, it is precisely artists from the former African colonies who have been enormously enriching the country's musical and poetic spectrum for some years now. Angolan Aline Frazão is one of them. Mythical images of the rain, sometimes dance-like, sometimes ballad-like memories of Angola's landscapes, a chanson that mutates into a bossa, a transatlantic cello and images of nature made with Cape Verdean strings: these are just some of the ingredients for her forth work "Dentro Da Chuva", on which the singer / Songwriter draws wonderfully dazzling soundtracks on the Atlantic Ocean.

Frazão grew up in Angolas capital Luanda. At the age of 18 she came to Lisbon. She was already writing songs at an early age, and in these first compositions she was influenced by a wide spectrum of styles; Fado belonged to this just the same as Bossa Nova, Jazz the same as the music of Cape Verde. She didn’t lose touch with her Angolan homeland while in Portugal, on her debut album “Clave Bantu” (2011) she tells of the interactions between Africa, Brazil and Cuba.

After that she decided to join in an experimental phase. On her 2016 released CD “Insular”, also with Jazzhaus Records, she recorded in the seclusion of the Scottish Hebrides with the English producer Gilles Perring a song-cycle, which focused on a melancholic indie rock sound. With a noise guitar, verses of rap, to influences from Portuguese Nobel laureate José Saramago, with themes ranging from ocean romance to daily politics, Aline Frazão created her own island world. On her cliffs she shattered any clichés of Portuguese music, and in so doing, became pleasantly unpredictable.

For her forth work, the now 30 year-old Angolan woman navigates once again in the waters of her roots. Her alternative experiments have disappeared, rather prevailing on “Dentro Da Chuva” (Inside the Rain) is an unrestricted flowing, minimalist acoustic, and pure Lusitanian melodies. It’s as if she’s following up on the final song of “Insular”, with a lighthearted dance with lyrics in the Bantu language Kimbundu saying: Look hear and listen to me, I’m back from the stormy cool of Scotland into the warmer climes of the ocean! Aline Frazão’s new work celebrates the great weaving of the Portuguese-speaking cultures, that spans three continents and an island kingdom between them.

The eleven acoustic gems were recorded in Rio, Brazil. On the sound mixer was none other than Gabriel Muzak, one of the most exciting creators between bossa, rock and funk. We set sail from Rio and arrive in the Afro-Brazilian metropolis Salvador da Bahia, across to Angola, to Cabo Verde and to Portugal. A relaxed cruise on Aline's small boat of sounds, 500 years after Magellan's first circumnavigation of the world, a breeze of sounds, airy-light, but always with a poetic draft. Central to her are the fruity vocals and the acoustic guitar of the singer / songwriter, around which she weaves weightlessly colors of a guest guitar, a duet voice, a cello, from time to time she gives us with drums and Kalimba, sprinkles of dances, which the drummer Zero Telles shakes from his hands.

The anchor is being thrown on the Cape Verde archipelago, where the composer Danilo Lopes da Silva delivers a wonderful ballad about nature’s upheaval with his Angolan “sister” in “Peit Ta Segura” - Frazão sings this single in the local language of Criolu, in an Homage to her Cape Verdean grandfather. From Bahia we find a young representative of the Mùsica Popular Brasileira in Luedji Luna: In their duet “Kapiapia” the two women pour into their sound the mythical pictures of the Angolan poet Ruy Duarte de Carvalho; images of an old man, half human, half Deity, who lives in the midst of the rains. And then, quite surprisingly, Frazão’s adaptation of the Gainsbourg classic “Ces Petits Riens”, when the original already has a breath of Caribbean, she has produced her version to be a sensual sad Bossa Nova.

Angolan cheerfulness exudes in “Sumaúma”, a dedication to all the women who have supported the country’s struggle for independence. With “Manifesto” it becomes even more rhythmic, physical, with the colors of the thumb piano and a weave of percussion. Along with the guitarist João Pires, from Cabo Verde, she celebrates her body as a map of the seas, roaming a criss-cross from Rio to Zanzibar, from Addis Ababa to Luanda. Finally on the beaches of Cabo Ledo she meets the Brazilian cello star, Jaques Morelenbaum, and they paint a transatlantic picture of the melancholy of an unfortunate summer.

"Dentro Da Chuva" combines myths and metaphors from the sea, strong images of nature between water and sky, with the modern lifestyle of a young Afro-Portuguese woman - implemented with frugal instruments, but with the wide horizon of poetic visions.