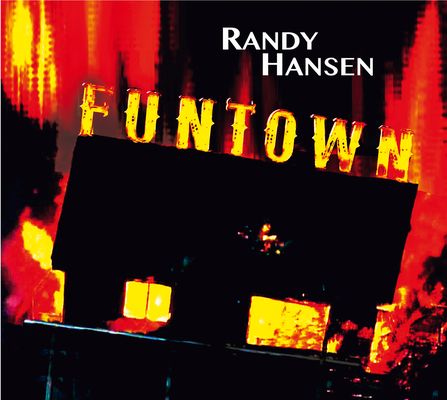 On his upcoming tour Randy Hansen will play a mixture of a Jimi Hendrix Classic Show and songs he wrote himself for his first studio album release titled Funtown in over eleven years. On the album the guitarist and singer surprises you with spherical sounds à la Pink Floyd and Frank Zappa, and also innovative sounds à la Jimi Hendrix. It was nothing more than laziness, that it took about a decade to release my fourth solo album. revealed the American. However, I have composed, played, recorded and produced all songs by myself (except The Pain where my son Desmond plays the drums) in my home Studio. The title Funtown is a fictional amusement park where each visitor can do everything he desires. In this respect, my politically motivated love songs are nothing more than reality become fantasy. Stylistically”, remains the left-hander, who is from Seattle like Jimi Hendrix faithful: This record is not different from the albums before, but it keeps the path continuing, because I can just write in the way which is typical for me.. Does Randy want to create himself as an independent artist with his fourth solo album apart from interpreting Hendrix? No, because I'll always play Jimi's music. But I am no longer a tribute act, as it is more like an orchestra that performs the great works of classical music.

Live on stage he is combining his own compositions with The Best Of Hendrix”. We are changing the setlist every night a bit, said the 60-year-old. Only the classical songs of course remain in the program. We also play a lot of songs that Jimi never presented live on stage. But I do not copy his songs note by note. I interpret the songs rather as he would – in my opinion – play them today. In his songs there is a lot of good advice - about how to spend your life and how to enjoy it! The things about which he wrote, revolved mostly around people's happiness and how to achieve peace of mind.. This view expands Randy Hansen now even on his new album Funtown: You should not impose restrictions to yourself - nothing is impossible!