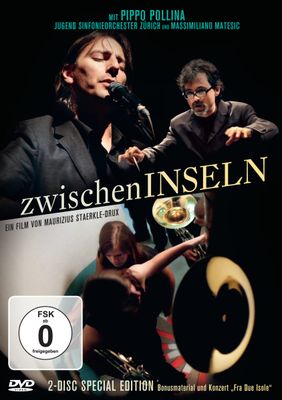 It is the musical journey a lifetime. Pippo Pollina is one of the most significant Italian singer-songwriters. Some years ago he turned his back on Sicily and went to live and work in Zurich. Together with the conductor, Massimiliano Matesic, and the Conservatory of Zurich’s Youth Symphony Orchestra, the singer and composer embarks upon a remarkable concert tour – between Zurich and Sicily, between classic and pop, between politics and music. BETWEEN ISLANDS is a visually stunning, enthralling documentary film that brings together musicians of different generations and temperaments.

2 DVD SPECIAL EDITION with the documentary the concert premiere of FRA DUE ISOLE and backstage bonusmaterial. ,A touching film portraying the delicate ties among the members ,of a youth symphony orchestra who are at the service of an aspiring troubadour and, in return, get to travel throughout Italy. The film captures the impressive result of an encounter between two artistic dimensions: classical (symphonic) music and chanson, namely by highlighting its most important key positions step by step, ranging from rehearsals to creative phases and culminating in concerts and the burst of enthusiasm while on a long tour throughout Italy. awarded with the Alexis Thalberg Price for the most innovative documentary 2011.