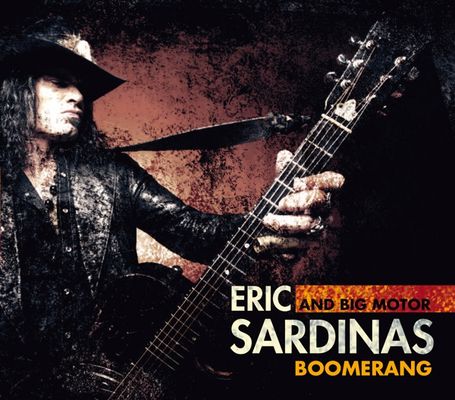 Boomerang brought a whole new experience to the 1970’s born musician, who live in Los Ange-les, when he is not somewhere in the world on tour. We recorded the songs in between tours, not all at once, as we had always done before. There was no other way, we had no choice, because our schedule was so jam-packed in the past few years with performances all around the world. We couldn’t even clear a block of time in between for a few weeks, in order to retreat to the studio. On the other hand, it gave us the advantage to take our stage energy into the studio with us. It was all only possible though, because I wrote my songs on the road – when I come home, I have a pile of papers, napkins and other little snippets, on which I have kept my ideas and then at home I bring them all together. But that’s how I get plenty of inspiration, which expresses the reality of my fans, in which they can find themselves in. I don’t have to come up with grandiose lyrics, but rather can scoop them up from real life. And I am sure, that many song ideas came from Germany, where I have toured for many years.

Releasing Boomerang 3 years after the release of their last album Sticks & Stones, Eric Sardinas and Big Motor are presenting their debut to the Freiburger Jazzhaus-Label. That is one reason, why I have waited with my original release-idea. I had wanted to do four mini-releases with 5 songs each over the course of the year. But after discussing it with Jazzhaus, I decided to deliver a compact collection of 10 songs on one CD, tells Sardinas as he lets us behind the scenes.

Nine of the tracks on Boomerang are his own creation, and he added one cover song. Trouble is taken from the vault of his great idol. My first concert that I attended at a young age was one of Elvis Presley. He more than mesmerized me with his energy on stage – and his songs were simply awesome! And ‘Trouble’ was always one of my favorites, he explains his decision. In this way, I want to carry on his legacy! However this song, like Boomerang, exemplifies Sardinas’ musical ambition. I want to bring straight Rock n’ Roll and Blues together and mix them up into my own thing.