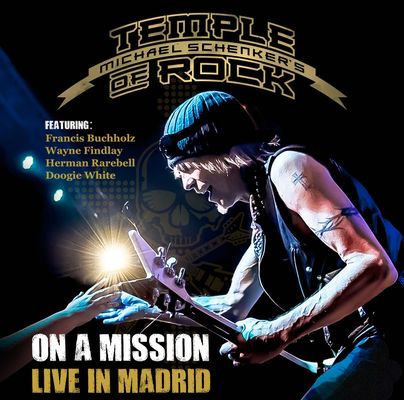 On A Mission - Live In Madrid

What on the surface might appear to be a platitude, is a serious invitation for the fans of the “Mad Axeman” and one they are happy to take him up on. Where else could aficionados of high-class guitar rock see such an emotional and energetic show? And one featuring a line-up that leaves connoisseurs of the international music scene rapturously clicking their tongues in appreciation.

During their world tour of 2015/2016, the line-up set up their Temple of Rock in the Joy Eslava theatre in central Madrid. Michael Schenker and his crew chose this unique location with care for the recording of this concert. The musicians clapped along with the fans as they sung along to hits old and new with great enthusiasm. All musical phases of Michael Schenker's career were included and the evening became a joyful party as well as a clear message of how positively Michael Schenker's music can enrich the listener's life.

Michael Schenker played various guitars, including for the first time his new double-neck Flying-M with 2 necks, each with 6 strings, with each neck tuned differently.

Also available on DVD and Blu-ray.