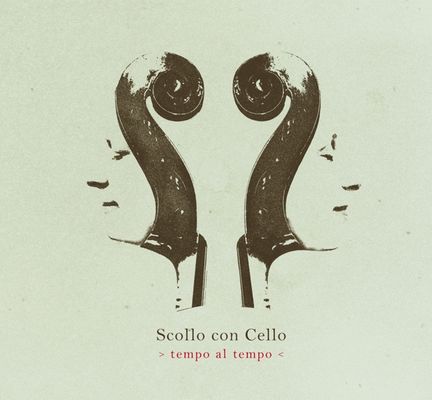 Tempo al Tempo is the new jewel in the crown of the versatile Sicilian musician Etta Scollo. A wreath in which are embedded works crossing all kinds of music, from pop to opera, jazz and traditional music, genres that merge into each other in a constant search for dialogue with other artistic expressions, especially poetry which through music becomes the key to the most hidden places of the soul.

With this work the dialogue continues with a new companion, the cello, an instrument that in the capable hands of Susanne Paul becomes the other voice of a duet, a pas de deux to make a sincere, intense and sometimes ironic homage to the measure of our becoming: Time.

Etta’s time is not only the main theme of the 14 songs, but it is also the third party, the sap that beats the rhythm of our lives and at the same time the ubiquitous stone guest, herald of the Death, master of time.

Two female voices, two instruments played with poetic intensity, as in Aria, a song inspired by an ancient Sephardic song which tells the impossible love for an ethereal and elusive protagonist, through the passing of the ages and the eternal repetition of history. Voices that become irreverent in Derrida, in which the deconstructivist is deconstructed through a raw and rather tribal musical texture, and its interpretation of the time is freely re-interpreted in a way a bit dada.

The same irony is to be found in Monsieur Uno, a piece in the '30s style where Etta questions the dictatorship of the ego, amoral protagonist of Italian history. Irony that becomes parabasis in Acqua sarà (by the writer Daniela Rossi), transfigured and baroque in So ist mit dem Glück (by the poet Anna Boehm) and suddenly introverted and melancholy in the monologue in which the Metronome - the tool symbolising the constant march of time - sings and the cello beats the rhythm for him, in a game bitter-sweet game. In Monate, from an essential and laconic poem of the writer Joachim Sartorius, the reaper appears at the head of a wooden wagon while in two songs inspired by the lyrics of Quasimodo the dialogue between Etta and Susanne becomes lyrical and high, same as in the texts of Le Ali del Tempo and Ciatu, both by the Sicilian poet Sebastiano Burgaretta, the first a delicate romance, the second a hymn to life (in Sicilian language Ciatu means the vital breath that embraces everything). In serenade Vinutu, Sugnu time is shown in all its relativity and Sendersuchlauf, the only song written, composed and sung by Susanne Paul it becomes the lazy buddy of domestic intimacy where you can finally enjoy the midlife crisis.

But it is with the song 'Nnimini that we can find the key to Tempo al Tempo. The 'Nnimini are the riddles of the popular tradition of the land of Etta Scollo, interpreters of country wisdom. They have the distinction of wanting to stimulate the imagination of the listener, with bizarre questions, strong or absurd, behind which always hides the solution. Says Etta.

And it was through this archaic form of poetry that Etta Scollo and Susanne Paul succeed with complicity to condense in a few words the very sense of time, in its perennial actuality.