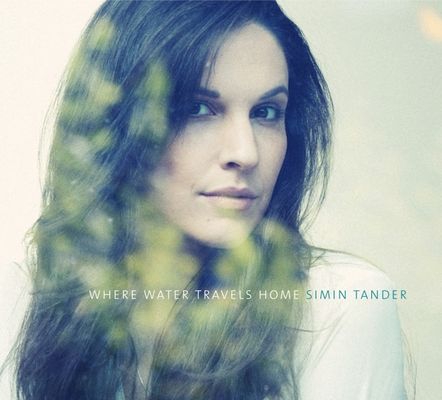 She is one of the most amazing personalities in young European jazz. With her enchantingly tender and equally expressive, masterful voice Simin Tander builds bridges between occidental jazz and arabesque-like vocal flights, between song-writing experiment, chanson and intimate ballad. Along with her quartet, the German-Afghan singer draws a fascinating route to her Mid-Eastern heritage and into the depths of her soul in her second CD.

It is a journey – to myself, through the world of my emotions and thoughts and to my Afghan roots, explains Simin Tander. Where Water Travels Home does not show us a conventional road movie: imaginative and labyrinthine, and therefore all the more compelling for the listener, are the sound routes which this water takes, and rather than the compass of the mind it follows the path of the heart.

Where water travels home – this is no abstract image. For the daughter of an Afghan journalist/poet and a German teacher, it rather means the actually experienced search for her identity. As a mature singer, she is now posing the question of the where from and where to in her second CD, which turns out to be a masterpiece of song-writing with an improvisational touch. The musicians are marvellously in sync with each other – Etienne Nillesen as an imaginative percussionist, Cord Heineking as a sensitively melodious bass player and Jeroen Van Vliet as a sometimes dreamlike pianist whose fingers fly over the keys and who is sometimes prone to experimentation. Simin Tander and her quartet build dramatic tension over the course of 13 stations, traversing past and present in a free-flowing dramaturgy.

The songs in her father tongue Pashto stand out immediately – Simin has tapped the rich sound of this idiom, which strikes us as very mysterious and poetic all in itself, specifically for this album. With a meandering voice full of intimate, whispering melancholy she carries the lyrics through the opening tune, Yau Tar De Grewan, and Pashto also gives wings to the bantering Afghan folksong Larsha Nengrahar Ta, with a groove that almost sounds like soul jazz over a tabla rhythm. We hear it in the calmly progressing narrative tone of De Kor Arman, too – an overwhelming song of longing for the homeland in which her voice suddenly sounds heavy, like dark honey: I wrote the music for this thinking about a poem by my father without ever having read or heard it. After searching for a long time, a good friend of his found a bunch of poetry in Canada. It also contained this poem. That it also fits the music perfectly is a lovely surprise.

Simin exhibits a playful side in Behind The Curtain and Little Song (the latter being dedicated to her two-year-old niece): here she used a fantasy language to write two charming miniatures between a percussive piano sound, with the fingers merely dabbing the keys, and the exuberance of a waltz. And then there are also the grandiose songs in English of course, covering a spectrum that ranges from colourful mini suites through to majestically whispered ballads. In writing some of the lyrics for these songs, she was assisted by her sister, the well-known actress Mina Tander. The centre of the album is Where Would I Fly If I Could. It is a flight that sometimes sounds like a prayer and at other times is almost psychedelic, a moving dialogue between the girl and the woman. The mysterious menacing mood of Dark Woods provides the setting for an exploration that goes deep into the undergrowth of the soul, while Our Silent Storm celebrates a love lost in the form of a magnificent elegiac hymn. The young singer also surprises us with an absolutely compelling adaptation of La Chanson Des Vieux Amants, a tune written by Jacques Brel. And in the final song, the delicate Traveling On, she takes heart after a lost love affair to self-confidently set out for new shores, even if this means crossing an entire ocean.

Even if I had only one breath left of my life, I would mould it into a verse. If I could grasp the thread of a collar, I would transform it into a melody, the Afghan poem of the opening song says. These lines also apply to Simin Tander’s music: she captured all the stirrings of the soul, delicate like a breath or a thread, with her inspiration, uniting them into a brilliant expression of deep emotions and magnificent sounds.