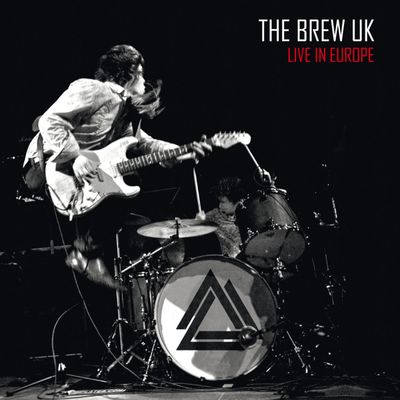 Anyone who's seen The Brew UK perform live knows why calls for a live album have been growing louder and louder by the year. The breathtaking, energy-packed show this trio of rockers from Grimsby puts on drives both the band and its audiences to ecstatic heights night after night. As soon as the three members of The Brew UK hit the stage, they put the pedal to the metal and don't let up until the last note has been played. The band is nothing if not dynamic and has wowed legions of fans with the heart, soul and authenticity they display onstage.

September 21, 2012 will see the release of a brand new album called Live in Europe. Finally, here is a recording that allows listeners to feel the unstoppable live energy of a concert by The Brew UK inside their own four walls.

Live in Europe presents guitarist and lead singer Jason Barwick, drummer Kurtis Smith and his father, bassist Tim Smith during their Spring 2012 tour across Europe. Most of the 12 cuts were heard originally on the band's two previous albums, The Third Floor (2011) and A Million Dead Stars (2010), but there's also Postcode Hero and Ode To Eugene from 2008's The Joker as well as the ever-popular drum solo by Kurtis Smith. The full-bodied, hard-driving mix of the live recording was crafted by renowned producer Chris West (Richard Ashcroft, Status Quo), who was also responsible for the brilliant sound of the band's last two studio albums.

Following countless headliner gigs all across Europe, several TV appearances (including the 3sat Tonträger Festival and the legendary WDR Rockpalast programme in 2009 and 2012), a selection of support shows (incl. Lynyrd Skynyrd and ZZ Top) and rave reviews in the press (one of today's most exciting live acts – ROCKS), the trio is ready to take to the road again this fall with an extensive German tour. Fans can rest assured that guitar standout Jason Barwick, top-flight drummer Kurtis Smith and groove specialist Tim Smith will celebrate the release of their new live album the only way they know how: By leaving every last bit of their passion and power on the stage.