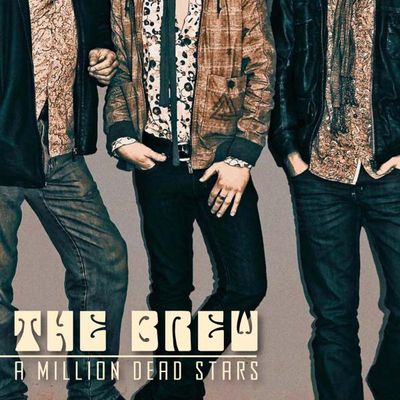 The Brew is bassist Tim Smith, son Kurtis Smith on drums and young phenom Jason Barwick on guitar and lead vocals. A generation-spanning line-up that fuses elements of classic rock from the 60s and 70s with the sounds of today. As the band's senior member explains, the explosive mixture heard on their latest album A Million Dead Stars is meant to appeal to both older and younger music fans: "Our style of playing is more of an echo from the past. But the production and sound we're striking for is a modern sound. As somebody once said, there's no future without the past. We hope to get the best of both worlds.".

Following their eponymous debut in 2006 and an EP entitled Fate and Time a year later, this up-and-coming British trio broke out internationally with 2008's highly acclaimed The Joker. Seemingly overnight, the band was filling thousand-seat venues in countries like Poland and Spain and making a high-profile TV appearance on Germany's prestigious Rockpalast music programme. Their recent signing with the label Jazzhaus Records coincided with an once-in-a-lifetime opportunity to record in world-renowned Chapel Studios with veteran producer Chris West. The goal of the sessions was to take the youthful exuberance and energy The Brew generates onstage and transport it onto record. A tall order to be sure. But A Million Dead Stars delivers.

For one thing, the band had already road-tested the songs. "We write songs we can play live" explains Tim Smith, "and we record songs we've been playing live. If it doesn't work live, we won't record it.". Fans will instantly recognize a number of tracks that were a part of the set list throughout 2009: the cracking and defiant opener "Every Gig Has a Neighbour" (with its anthemic "Turn it up, play it loud!" chorus), the unrelenting "Wrong Tunes" as well as an excellent version of the lyrical and poignant "KAM".

Some familiar elements remain integral to the sound. The ghost of Jimi Hendrix inhabits the bluesy riffs of "Surrender it All." Jason Barwick's acoustic playing on "Mav the Rave" and "Monkey Train" recalls Jimmy Page. There's even a nod to Malcolm Young (or rather, several nods) on the title track. Other songs, however, show the band expanding their territory, exploring more melodic themes while giving Barwick an opportunity to come into his own as a vocalist. In fact, the entire album serves as a kind of coming out party. The twenty-year-old Barwick only recently assumed duties as the band's lead vocalist, but is already showing signs of greatness. His shining moment on A Million Dead Stars comes on "Change in the Air" a standout tune not quite like anything the band has done before.

Drawing on his experience with classic rockers Status Quo and Uriah Heep as well as Britpop icons Richard Ashcroft and The Verve, producer Chris West has helped create a more varied album with intricately layered, more fully developed songs. There's no better example than "A Million Dead Stars". In its seven-and-a-half mind-boggling minutes, the song provides the set with a rousing climax – and gives us a first glimpse of the musical heights these talented artists are poised to climb.

Until now, The Brew has straddled a musical fence, finding friends in both the classic rock and traditional blues camps. There are pitfalls in constantly being compared to artists of the past – as Tim Smith and his two young bandmates are well aware. That's one reason they've worked hard to create something all their own, and to reveal more of their unique personalities in the process. "I think a band searches for its direction for a certain period of time" Smith reflects, "On A Million Dead Stars, it's very much our own sound.". At the same time, they chose not to complicate things or get too far away from what they do onstage. "For us, it's rock 'n' roll. We live it, breathe it, sleep it and eat it.".