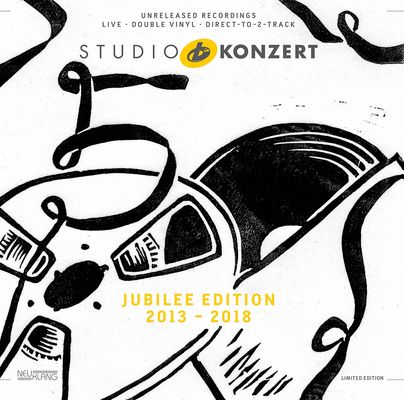 It is five years since the then CEO Eva-Bauer-Oppelland and the sound engineer Philipp Heck came up with the idea of staging concerts with an audience in the studio.

Well-maintained, analogue equipment including the Neve console and high-quality Studer tape machines are available. Eva Bauer-Oppelland, Reiner Oppelland and Johannes Wohlleben are part of a generation that used analogue equipment for recordings for many years and have passed on the tricks of the trade as best as they can.

This experience and willingness to experiment on the part of the sound engineers, who know the sound of the microphones and the room so well, was the basis for the top-notch sound quality of the recordings. And thus the STUDIO KONZERT vinyl series was born – a series of concerts completely recorded using analogue methods in an informative gatefold sleeve and pressed on hand-numbered, limited edition 180-gramme vinyls.

35 concerts have been released on vinyl in the last five years, Gems of analogue recording that keep the performance as fresh for the discerning listeners of the LPs as it was for the enthusiastic audience.

The concerts were mixed directly in stereo – a great challenge for the sound engineers at each concert. This means that all concerts in the series stand on their own as the work of just one day.

And now an exclusive sampler of the series is being issued to mark the five-year anniversary – a double STUDIO KONZERT vinyl with previously unreleased tracks that were recorded at 14 studio concerts over the last five years but for which there was no space on the original vinyl releases.

The two discs provide an overview of the fascinating variety and wide musical range of the studio concerts.

To create a good link between the tracks of the different concerts featuring various line-ups and music genres, a laborious analogue mastering technique was used for the first time in the Studio Konzert series. The sound of the live mix is nevertheless fully retained.

The former Tonstudio Bauer – founded in 1949 and rebranded as Bauer Studios GmbH in 1989 – is delighted to celebrate this anniversary. And there will soon be another occasion to mark – the studio will be 70 years old in 2019.

STUDIO KONZERT is the audiophile Direct-To-2-Track fully analogue recorded concert series, produced by the Bauer Studios since early 2013 and available in shops as numbered and limited 180g vinyl records with a premium-quality packaging.

STUDIO KONZERT: That is our large atmospheric recording room, which inspired numerous first-class artists. That is also extreme concentration and highly motivated artists for this very special moment. It is an attentive audience captivated by the fascination of this moment. This is the only way to create such fascinating moments in a very special concert situation.

STUDIO KONZERT: That are experienced sound engineers who conduct the acoustic brilliance with our first-class studio equipment: precious microphones, analogue effect devices and our clear, analogue Neve mixing console. Our Studer A 820 tape-records in a unique “direct-to-2-track” way.